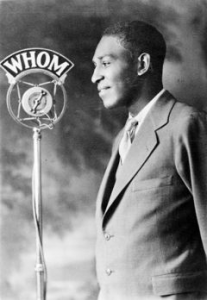 Sherman “Jocko” Maxwell, is considered to be the nation’s first African-American sportscaster. Maxwell’s broadcast career began in 1929 when he convinced the owner of WNJR in Newark into giving him five minutes of air time on Saturdays to read scores.
He was turned down 25 times before someone finally landing an announcer job. Mr. Maxwell went on to broadcast for various stations over the years, all while working full-time as a postal clerk. He retired from radio in 1967. During his career, Mr. Maxwell ran his own multiracial semi-pro baseball team. He also wrote a book entitled “Thrills and Spills in Sports” (1940).

An African American and Caucasian girl reading a sign in the integrated Long Island community of Lakeview, New York in 1962. It reads,

“Negroes! This community could become another ghetto. You owe it to your ‘family’ to buy in another community.”

The goal of the signage was to keep the number of African Americans in the integrated community from exceeding the number of whites in the community.

Toni Stone: One of The First Female Players In The Negro Leagues!

Tonie Stone, (July 17, 1921 – November 2, 1996), also known by her married name Marcenia Lyle Alberga, was the first of three women to play in the Negro baseball league. Toni Stone had a strong desire to play baseball even as a child. Her desire was so strong that she threatened to run away if she was unable play. Her parish priest arranged for her to become part of a church baseball team in St. Paul Minnesota in the 1930’s. It was not a girls team either! She wanted to play baseball with the boys and that’s exactly what she did! After graduating from high school, Stone, married Aurelious Alberga. Alberga was forty years her elder. Like many others in her circle, he did not want her to play baseball.

One of the teams she played for was the Twin City Colored Giants, a male African American team. She faced lots of ridicule and disrespect for playing in a male dominated sport. Eventually, she was hired by the Indianapolis Clowns to replace Hank Aaron when he began to play for the Major Leagues. Stone played into her early 60’s. However, her story has largely gone untold. After the 1954 season, Stone moved to Oakland, California. She began working as a nurse and also cared for her sick husband who died in 1987 at the age of 103. Stone died on November 2, 1996 at a nursing home in Alameda, CA. She was 75 years old.

The Dahomeyan and Ashanti women were fearless soldiers; trained to fight with muskets, machetes and their bare teeth. As early as 1729, European traders chronicled the fighting-women of the Fon (Dahomey people) and their neighbors the Ashanti. Originally set aside as a royal guard, Dahomey amazons held a revered status as celibate warrior “wives” of the King. Known for their impeccable physiques and fighting skills, they were in constant competition to out do their male counterparts. During two centuries of raids and wars against nearby kingdoms, the Dahomeyan excelled in their prowess as tenacious warriors. By 1890 they made up over 30% of the Dahomey fighting army.