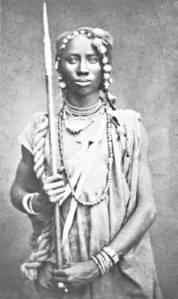 The Dahomeyan and Ashanti women were fearless soldiers; trained to fight with muskets, machetes and their bare teeth. As early as 1729, European traders chronicled the fighting-women of the Fon (Dahomey people) and their neighbors the Ashanti. Originally set aside as a royal guard, Dahomey amazons held a revered status as celibate warrior “wives” of the King. Known for their impeccable physiques and fighting skills, they were in constant competition to out do their male counterparts. During two centuries of raids and wars against nearby kingdoms, the Dahomeyan excelled in their prowess as tenacious warriors. By 1890 they made up over 30% of the Dahomey fighting army.