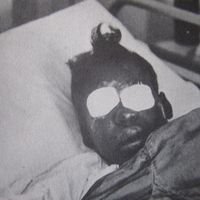 Many are aware that 4 young girls lost their lives during the 1963 bombing of 16th Street Baptist Church in Birmingham, Alabama. Addie Mae Collins, Carol Robertson, Cynthia Wesley, Denise McNair all lost their lives that day. However, many people are unaware that there was a 5th girl in the church that day who survived the attack. Her name is Sarah Collins Rudolph. The horrific act left the country in shock. Sarah was 12 years old at the time of the attack. She and 22 others survived the attack.

Sarah was severely injured, losing an eye, and suffering severe cuts throughout her body. She also struggles with memory loss and post traumatic stress stemming from the bombing. She spent 2 months in the hospital after the bombing and has had numerous surgeries over the years and ongoing health issues as a result of the bombing. Many of her health issues had to be navigated during times when she did not have health insurance. Sarah received no compensation or assistance with her medical bills after the attack. Robert Chambliss was tried for murder in the case in October 1968. He was found not guilty but was sentenced to 6 months in jail and fined $100 for possessing dynamite. The case was retried in 1977 and Chambliss was found guilty of murder and sentenced to life inn prison. He was 73 at the time. He died in prison in 1985.

It is also sad to note, that Sarah’s story has not received much recognition over the years. She has been left out of many events commemorating the bombing. Her story is certainly worth sharing and deserves to be remembered.