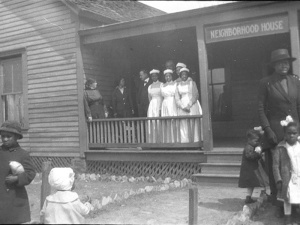 The Neighborhood Union was officially chartered in 1911. It was viewed as a prototype for grassroots organizing and social work. At the time of its formation, Atlanta, GA was viewed as one of the most segregated cities in Georgia. Poor blacks living there often endured very poor living conditions and little to no access to quality health care and other community resources. At the time there no playgrounds where black children could play in the city.

The Neighborhood Union got its start in the West Fair neighborhood close to Morehouse College. Lugenia Hope recruited Morehouse student to do door-to-door canvassing and interviewing of neighborhood residents about their family circumstances and needs. Demographic data was collected to determine what kinds of programs would assist neighborhood residents. She used the information and her influence to encourage Morehouse College to provide daycare space, kindergartens and recreational facilities to help improve resources available to poor black families in the community. The Neighborhood Union divided the city into districts. Each district had a board of directors that investigated the living conditions in that particular area. The condition of schools in the area was of particular interest and concern. The Neighborhood Union petitioned the Atlanta Board of Education in 1913 to build new schools. Their data collection and lobbying efforts also led to an increase in teacher salaries. The Neighborhood Union also offered classes in various subjects. It sponsored health clinics and afterschool programs. In 1909 The Neighborhood Union began providing political advocacy when it petitioned the Atlanta City Council to rid the community of “a house of questionable character”. The organization also advocated for adequate lighting, sewage treatment, and replacing of dilapidated housing.