The Negro Digest: The Black Reader’s Digest of Its Day 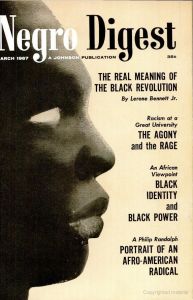 The Negro Digest was launched by publisher John H. Johnson in 1942. It was advertised as a new type of “Reader’s Digest” for the African American Community. The publication mainly consisted of reprinted articles of interest to its African American readership. Johnson was initially unable to secure financing for the publication. It approached many sources from white bankers to the NAACP.   Johnson eventually financed the publication on his own. At the time he worked for a life insurance company. He offered prepaid $2 subscriptions to customers and was able to secure 3,000 pre-paid subscriptions through this appeal.

Early sales appeared promising with the publication achieving a distribution at its height of 150,000 issues per month. Distribution was challenging as some businesses did not want to openly display the publication believing it would not sell. Johnson encouraged his friends to approach local businesses requesting the Negro Digest. However this early success was soon eclipsed as Ebony Magazine was launched. As a result the Negro Digest began to lose money and ceased publication in 1951.

John H. Johnson re-launched the Negro Digest in 1961 under the leadership of a new editor, Hoyt Fuller. The new style of the publication was much different than the original. The publication was transformed from a catalogue of stories to a key voice in the Black Arts movement. Under Fuller’s leadership, the magazine reported on many controversial issues like the Black Power movement. In 1970 the name of the publication was changed to “Black World” to reflect the broadening of its target audience from the U.S. to an international audience across the African Diaspora. The publication’s new emphasis on politics and world issues demonstrated its desire reach blacks world-wide and not just in the United States. Publication of Black World was abruptly stopped in 1976.

Did you miss yesterday’s post?  Click here to learn about Power Center Academy, a high school in Memphis, TN that is becoming an athletic trailblazer in the sport of rugby.

4 thoughts on “The Negro Digest: The Black Reader’s Digest of Its Day”