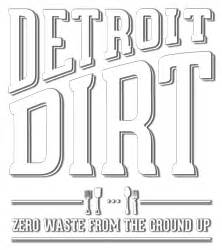 Pashon Murray’s work in the family owned waste removal business, was a catalyst and inspiration for her current work as co-founder and now CEO of Detroit Dirt. Detroit Dirt was started by Murray and urban farmer Greg Wilerer in 2011. Wilrer is no longer with the business. Murray hails from Grand Rapids, MI but now calls Detroit home. She is a graduate of Texas Southern University, a historically black college. After graduating college, Murray worked briefly and then decided to return to Grand Rapids to explore starting her business combining her interests in agriculture and the environment.  A major focus of Detroit Dirt is making compost (soil). However, the primary goal of Detroit Dirt is to help the city develop greater urban sustainability. Through its composting operation, Detroit Dirt diverts tons of waste from being placed in area landfills.

Detroit Dirt turns the waste into a useful product (compost). Compost provides key nutrients that are critical healthy plant growth. Compost also helps to upgrade soil structure and improves the soils ability to retain moisture and air. It also reduces dependence on chemical based fertilizers. The use of composting promotes the use of sustainable practices. Detroit Dirt strives to support communities and corporations to think and act in ways that promote sustainability. Detroit Dirt’s mission is: “Cost Effective Earth Protective”

Detroit Dirt is a 2 acre space that is supplied with manure from the Detroit Zoo, and also takes delivery of organic food waste from area restaurants. MIT is currently assisting Detroit Dirt with implementing technology refine their current processes for composting. Pashon Murray’s desire is the help her community and the environment. She is excited about creating opportunities for the next generation of youth. Murray’s strategies are unique in that they are “closing the loop” and supporting the growth of the local economy.

This Sister/CEO is taking the Motor City by storm and creating greater economic and environmental security for the entire community.

One thought on “Detroit Dirt: Creating Environmental Security and Sustainability”