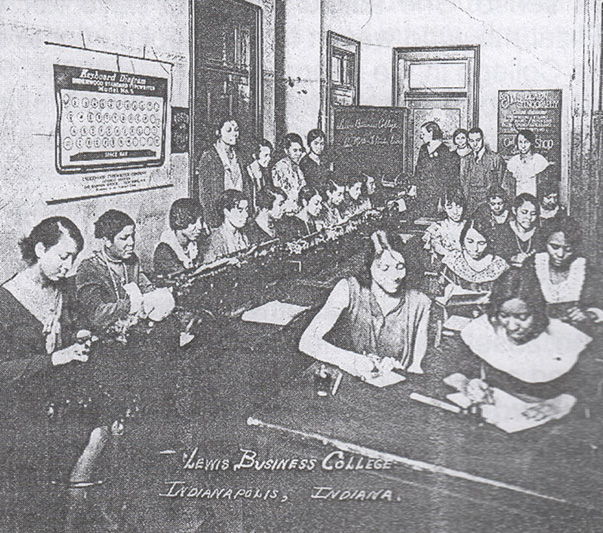 Lewis Business College was a trailblazer in providing business education to African American students.  The college was launched by its visionary founder, Violet T. Lewis.  Her dedication and perseverance paved the way for thousands of African Americans to access higher education.  Violet Temple Lewis (1897-1968), was born in Lima OH. She was the second of six children. She was a graduate of Wilberforce University in 1917. After graduation she accepted a job as a secretary at Selma University in 1918. Noticing that there were no secretarial courses offered at the university, she requested and was approved to start teaching secretarial subjects. In addition to working at Selma University, she also worked for the Madame CJ Walker Company in Indianapolis as a bookkeeper, and then found a better paying job working for the Indianapolis Recorder from 1920-1927. She married Thomas Garfield Lewis in 1920. They had 2 children, Phyllis Lewis Ponders, and Dr. Marjorie Lewis Harris. Violet Lewis divorced her husband in 1942.

While working at the Indianapolis Recorder, she became concerned about the high unemployment rate brought on by the Great Depression. Lewis was especially concerned about the high unemployment of black youth in Indianapolis. At that time, few, public or private colleges and universities would accept black students. In 1928, Violet Lewis began offering secretarial classes in her home. As enrollment began to increase, she move the school to a storefront location; thus, founding, “Lewis Business College” (which eventually would change its name to Lewis College of Business). Tuition was $2.50 per week and 20-25 students were served. Lewis continued to work full-time as she worked on building school enrollment. She would barter tuition fees for childcare and meal preparation.

To help boost enrollment, Lewis started her own radio program in 1932 called, “The Negro Melody Hour”. She was the first African American radio announcer in Indiana. The radio show was very successful and made it possible for Lewis to move the school from her home into its own building. Lewis continued to expand her entrepreneurial footprint by opening 3 more businesses in 1936; a nut shop, letter shop and ice cream parlor. All of these businesses hired students from her school. Soon, Violet Lewis began to consider ways to expand the school beyond Indiana. In 1938 she visited Detroit and determined that there was a significant need for students there. Detroit’s Booker T. Washington Business Association (BTWBA) lead by Rev. William Peck of Bethel AME Church played an integral part in helping Lewis launch the school in Detroit. The Housewives League of Detroit was also instrumental as well. The Detroit branch of the Housewives League was founded by Rev. Peck’s wife, Fannie Peck. The goal of the Housewives League was to promote black businesses. Officers of the league would learn about the products and services of local black businesses and assess their quality. They would then go do to door in black communities asking the community to support local businesses in their area. They would also work diligently to shut down businesses that were not reputable. The group began to enthusiastically promote and advertise the soon-to-be-opened business college.

In September 1939, Lewis College opened its doors in Detroit. It was the first business school in the city to accept African Americans. Lewis closed the Indiana location in 1940 to focus her efforts in Detroit. The school grew quickly and was serving 300 students daily throughout the 1940’s-50’s. The school offered courses in typewriting, bookkeeping, stenography, penmanship, and office management. Graduates were employed by General Motors, Ford, Michigan Bell, National Bank of Detroit, Wayne County, State of Michigan Chrysler and the City of Detroit. Graduates would be among the first African American employees hired into professional positions at these companies. Lewis Business College expanded again in 1942, adding a campus in Cleveland, OH in 1960. It was also the first school of its kind for African Americans there as well. After decades of leading the college, Lewis passed way due to cancer in 1968. After her death, her daughters led the college.

In 1976, the Detroit campus relocated to its final location on the Northwest side of Detroit. The Cleveland and Detroit campuses were consolidated in 1978 to form the Lewis College of Business. At that time it became an accredited junior college. At the height of its enrollment in the 1980’s the college served 550 students. In 1987, Lewis College of Business was designated as a Historically Black College and University (HBCU). Enrollment slowly began to decline in the 90’s. By 2003, over 40,000 students had attended the college. The school lost its accreditation in 2007, leaving its future in doubt. Classes were scheduled to resume in 2008. However enrollment was very low. The school was put up for sale in 2013. The campus has experienced several fires and is currently vacant.

The daughters of Violet Lewis, have written a book to chronicle their mother’s experience, “On Her Own Terms”.

One thought on “Lewis College of Business: A Detroit HBCU”