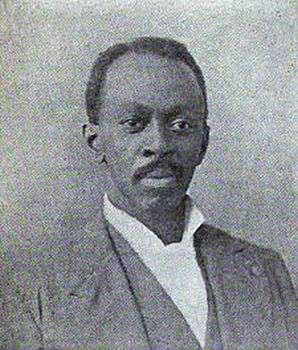 Richard R. Wright, Sr. (1855-1947) was born enslaved near Dalton, GA.  Following the Civil War, he and his mother moved to Atlanta, GA.  There he enrolled in Storrs School.  Storrs was founded by the American Missionary Society to educate the children of free blacks.  Storrs would eventually become Atlanta University.  Union General Oliver Otis Howard visited the school in 1868.  While there, he asked the students if they had any thoughts they would like him to share with the North.  Wright replied, “Sir, tell them we are rising.”  Wright was the valedictorian of Atlanta University’s first graduating class in 1876.  He also married Lydia Elizabeth Howard in 1876.  Together they had nine children.

Wright founded the Georgia State Industrial College For Colored Youth in 1891.  The college was located in Savanah, GA.  Today the school is known as Savannah State University.  Wright served as the university’s first president from 1891 – 1921.  By the end of Wright’s time as president, the college had grown its enrollment to 400+ students, a significant increase from the 8 students who entered the school in 1891.  END_OF_DOCUMENT_TOKEN_TO_BE_REPLACED