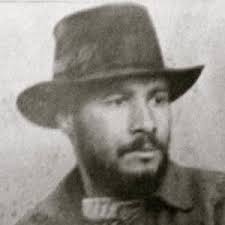 William H. Johnson (1901 – 1970) was an African American painter. Born in Florence, South Carolina. He was the oldest of five children. Johnson moved to New York at age 17 where he was employed as a cook, porter, and stevedore. Johnson saved up enough money to pay for tuition and enrolled at the School of the National National Academy Design. While there, he was mentored by artist, Charles W. Hawthorne. Hawthorne paid for him to study abroad in France in 1926. Johnson worked as a janitor to earn extra money during that time. In 1930, he married an artist, Holcha Krake. The couple traveled extensively. In 1932 they arrived in Tunisia where they stayed for three months. His artistic works changed dramatically during this time.  His pieces feature more bold colors and shapes, and were centered on African American subjects.   As World War II loomed, Johnson relocated back to the U.S. settling in New York.

He taught painting classes briefly at the Harlem Community Art Center. In 1942 his painting of black soldiers was featured in an exhibit at Metropolitan Museum of Art. Johnson’s wife Holcha was diagnosed with breast cancer. She died in 1944. Johnson was devastated by her death. From 1944-1946 he worked as a laborer in New York’s naval yards. In 1946 he traveled to Denmark and stayed with his wife’s family.
Since his wife’s death, Johnson struggled with mental health concerns. In 1946 he was arrested for vagrancy and also diagnosed with syphilis-induced paresis. He was then sent back to New York and placed in the Central Islip State Mental Hospital.

He spent the remaining 23 years of his life there; no longer producing any artwork for the remainder of his life. Sol Romaner a New York attorney became his guardian in 1948. He arranged for Johnson’s artwork to be taken out of storage and gave it to the Harmon Foundation. The foundation distributed his works to relatives, friends, museums and other foundations including the National Museum of American Art, a branch of the Smithsonian Institution. Johnson died on April 13, 1970, of acute pancreatitis.