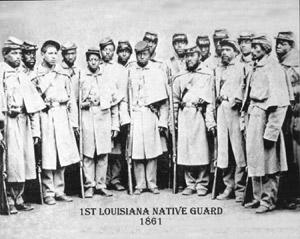 Ironically, the Louisiana Native Guards first sought to join the Confederacy forces.  Soon after the start of the Civil War, a group of free and mixed-race men living in New Orleans convened to determine where their allegiance should be in regard to the Civil War.  The group decided to give their allegiance to the Confederacy due to New Orleans already being a member of the confederacy at that time.   There was a number who had been free for several generations, as well as some that were also quite wealthy.  Some of these men even owned slaves.  Since Louisiana was originally a French territory, its laws pertaining to slavery were different than those in other southern states.  Slave laws in Louisiana provided more humane treatment than the treatment received by those enslaved under the southern chattel slavery system.  Louisiana also provided easier routes for the enslaved to gain freedom.  Laws such as the right to legally marry and the right for families not to be separated were some of the ways enslavement in Louisiana was different than chattel slavery in other southern states.  The City of New Orleans had a large population of free blacks and people of mixed-race heritage who were educated, property owners, business owners, and in some cases slave owners.

Why free African Americans would organize to fight for the confederacy has been intensely debated. Some believe that free blacks chose to align themselves with the confederacy in hopes that it would advance opportunities for themselves and their families. Others believe that the group feared retaliation if they refused to respond to the governor’s requests for volunteers. A total of 1,500 men volunteered for the Louisiana National Guards.  The government of the confederacy initially welcomed the group’s participation.  However, the racist mindset of the confederate government would soon be exposed.  The potential abolition of slavery worried slave owners.  Desperate to justify their position for continuing slavery, slave owners engaged in a campaign to advance the idea that the black race was inferior to the white race.  Having an all-black unit fight alongside white confederate soldiers would undermine their position of white supremacy.  Threatened that their superiority might be undermined they denied the Louisiana Native Guards request to fight as part of the Confederacy. After being denied approval to join the confederacy as a military unit, the group disbanded a year later.  Around this same time, New Orleans surrendered to the United States Army and Navy.

Now part of the Union, New Orleans sought to recruit local volunteers, particularly men of color into its ranks.  The Louisiana Native Guards who had been denied by the Confederacy just a year earlier were now sought after by the Union.  The Louisiana Native Guards enthusiastically accepted the invitation of the Union to join their ranks.  Feeling less threatened by Confederate retaliation, within just a few weeks, more than one thousand men signed up for enlistment.  While the rules stipulated that only free men could join the guard; runaway slaves who were coming in large numbers were also allowed to join the regiment.  On September 27, 1862, the Louisiana Native Guards was officially mustered into service as part of the Union Army making it the first black regiment to serve in the Union Army.  Unlike other units of African American soldiers; officers of the Louisiana Natives guards were well educated, wealthy, and highly respected members of the community eager to join forces against the confederacy.

One of these men was Captain Cailloux, who was fluent in both English and French, and who had been educated in France – an education which had included extensive military training.  The Louisiana Native Guards first saw combat in May 1863, Under the command of Major General Nathaniel Banks, the unit assigned to assist with the assault on Port Hudson which was a confederate stronghold near the Mississippi River.  The unit had a difficult task in overcoming the 6,000 heavily armed Confederate troops that had assembled to do battle with them. The Confederate assault was unrelenting and began to drive back the Union troops.  Yet, the Louisiana Native Guards persevered. Outnumbered, and with no back up they pressed forward.  Though they fought valiantly, they were ordered to withdraw due to being outnumbered. The bravery and courage displayed by the unit made it impossible for anyone to challenge their inferiority to other white soldiers.

The heroism of the Louisiana Native Guards would serve to usher in the service of 180,000 black men into the Union Army during the Civil War.