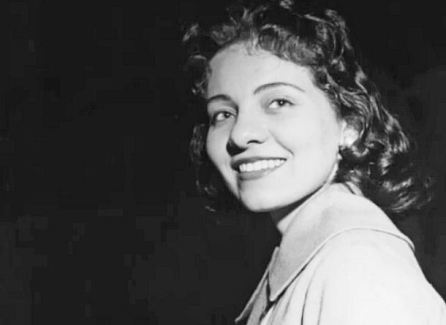 A native of Chicago, IL, Diane Nash (1938-) was one of the pioneering forces behind the Civil Rights movement. Nash and many other women  were champions of the movement.  She became active in the movement in 1959 as a new student at Fisk University in Nashville, TN.  While at Fisk she would encounter the harsh realities of segregation and prejudice that were previously unknown to her.  In 1959 she attended a workshop focused on non-violent protesting. She would quickly become a respected leader of Nashville’s “sit in” movement.  Her efforts were instrumental in organizing the first successful campaign to end segregation of lunch counters.  This effort engaged hundreds of black and white college students as volunteers.  She was also one of the founders of the Student Non-Violent Coordinating Committee (SNCC).  SNCC would play a major role in the civil rights movement by engaging young college students in civil rights activism.  These efforts were successful and in 1960, Nashville became first southern city to desegregate lunch counters.  END_OF_DOCUMENT_TOKEN_TO_BE_REPLACED

James Zwerg-Freedom Rider: “……..Got so much notoriety because I was white”

James Zwerg was born in Appleton, Wisconsin in 1939 and attended Beloit College. He developed an interest in civil rights from his relationship with his African American roommate, Robert Carter who was from Alabama. Zwerg witnessed the racist treatment of his roommate and it deeply moved him. Zwerg participated in student exchange program at Fisk University a predominately black university in Tennessee. There Zwerg met civil rights leader, John Lewis and began to become active in the Student Non-Violent Coordinating Committee (SNCC). Zwerg tried to attend a movie at a segregated theater with other black SNCC members and was attacked, being hit in the head with a monkey wrench and knocked unconscious.

In 1961, Zwerg and other SNCC members participated in the “Freedom Rides” which were bus trips into parts of the south that were used to protest segregation. Zwerg was the only white male in his group and volunteered to get off the bus first when it reached Montgomery, AL.. When Zwerg stepped off the bus, his suitcase was grabbed and smashed into his face until he hit the ground. He was then beaten repeatedly. His teeth were knocked out during the beating and his attackers showed no signs of stopping. A black man stepped in and ultimately saved his life yelling at Zwerg’s attackers to beat him instead; which they eagerly did. Zwerg was denied prompt medical attention because there were no white ambulances available. He remained unconscious for two days and stayed in the hospital for five days. His post-riot photos were published in many newspapers and magazines across the country. Much of his time in the hospital he claims not to remember.

Of his savage beating, Zwerg said,

“There was nothing particularly heroic in what I did. If you want to talk about heroism, consider the black man who probably saved my life. This man in coveralls, just off of work, happened to walk by as my beating was going on and said ‘Stop beating that kid. If you want to beat someone, beat me.’ And they did. He was still unconscious when I left the hospital. I don’t know if he lived or died.”

“I looked at it, and what it brings back to me more than anything else is that I got so much notoriety because I was white,” he says. “I looked at that picture and I thought of all the people that never get their names in a book, never get interviewed but literally had given their lives. Who the hell am I to have my picture up there?”  He was suddenly flooded with guilt. -James Zwerg

(Excerpt from John Blake’s book, “Children Of The Movement”)

James Zwerg was presented with the Freedom Award  by Dr. Martin Luther King, Jr. and the Southern Christian Leadership Conference in 1961.

Was Zwerg struggling with grasping the impact of “white privilege” even before it had a name?  Though his efforts were heroic he wondered if the notoriety and attention he received was due largely in part to him being white.  Blackmail Friends, what do you think?

Click the link below to read a CNN article about James Zwerg and his experience.