Robert Robinson Taylor (1858 – 1942) is recognized as the first academically trained Black architect in the U.S.  Taylor grew up in North Carolina, where he worked for his father (Henry Taylor) as a carpenter and foreman.  Henry Taylor was a successful builder. Robert Taylor’s mother was Emilie Taylor.  Both Henry Taylor and Emilie Taylor were reported to be of mixed race.

Robert Taylor graduated from the Massachusetts Institute of Technology (MIT).  The final project he completed for his bachelor’s degree in Architecture was “Design for a Soldier’s Home.”  The project examined suggested a design to provide housing for aging civil war veterans. He graduated from MIT in 1892 at the top of his class with a bachelor of science degree in architecture.  Taylor was the first black person to graduate from MIT with an architectural degree.

END_OF_DOCUMENT_TOKEN_TO_BE_REPLACED

In 1868, the College Museum was founded at Hampton Institute (now Hampton University) by Samuel Chapman Armstrong (1839 – 1892). It is the oldest African American Museum in the U.S. Now known as the Hampton University Museum, it is still in operation on Hampton’s campus.

Armstrong was a white Union army general who commanded U.S. Colored Troops. Armstrong believed that education and training were essential to newly freed slaves. Armstrong worked worked with the Freedman’s Bureau and founded Hampton Normal Institute in 1868. One of his most famous pupils was Booker T. Washington. Washington greatly admired Armstrong and his approach to education. It was upon Armstrong’s recommendation that he was appointed to lead Tuskegee Institute. Washington patterned much of Tuskegee’s educational programming after Hampton Institute.

For more information on the museum, check out their website: 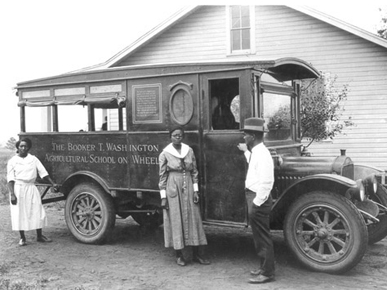 Booker T. Washington, founder of Tuskegee University, and scientist/inventor George Washington Carver are well known for their pioneering work in education and agriculture at Tuskegee University.  Many may not know though that they also offered people the opportunity for education through a “school on wheels”. END_OF_DOCUMENT_TOKEN_TO_BE_REPLACED

The Niagara Movement: A Predecessor of The NAACP

The civil rights organization known as the “Niagara Movement” was organized by W.E.B. DuBois, William Trotter, Frederick McGhee and Charles Bentley in 1905. Its inaugural meeting convened 29 business owners, teachers, and clergy at Niagara Falls in 1905.

By the turn of the 20th century, African American activists began mounting a more active opposition to racist government policies and practices than what was advocated by Booker T. Washington.  Washington, at the time was considered to an influential African American leader at the time.  The Niagara Movement stood in staunch opposition to Booker T. Washington’s Atlanta Compromise which promoted accomodationism. The compromise was an agreement struck in 1895 lead by Booker T. Washington and other African American leaders with southern white leaders. The agreement sought to have blacks agree to work menial jobs and be submissive to white political rule. In exchange, Southern whites agreed that blacks would get basic education and due process in legal matters. Blacks would agree not to agitate in their quest for racial equality, integration, or justice, and Northern whites would agree to fund educational charities for blacks.

DuBois and Trotter felt strongly that Washington’s expectations of blacks were too low and that as a race of people, blacks should not be resigned to these lower expectations. In its “Declaration of Principles”, The Niagara Movement proclaimed,

“We refuse to allow the impression to remain that the Negro-American assents to inferiority, is submissive under oppression and apologetic before insults.”

The movement’s goal was to address various sectors and systems that disenfranchised blacks such as the criminal justice system, economic system, the religious community, health and educational systems as well as bring an end to segregation. The Niagara Movement stood in contrast to other black organizations of its day because of its unrelenting emphasis and demand for racial equality. It tirelessly advocated for the right to vote as well as educational and economic opportunities for black men and women. From its initial group of 29 members, it grew to 170 members in 34 states by 1906.

Though making great strides, the movement also experienced some significant struggles over its four year existence. One of its primary struggles was the disagreement of its founders on the inclusion of women as part of The Niagara Movement. DuBois supported the inclusion of women, while Trotter was against it. Trotter resigned from the organization in 1907. His departure from the organization appeared to have a negative effect on the membership The Niagara Movement. Booker T. Washington used his popularity and the high profile attention he received in the media to further undermine The Niagara Movement. His influence impacted the amount of media coverage the movement received at its 1908 conference. Washington also published an “obituary” in The New York Age to publish satirizing the decline and metaphorical “death” of The Niagara Movement. The New York Age was one of the most influential black newspapers of its time.

The group convened annual meetings until 1908 and disbanded in 1909. Racial unrest was rampant in many areas at the time. Springfield, IL was the scene of deadly race riot in 1908 where 8 blacks were killed. The unrest caused over 2,000 blacks to leave the city. While other riots had taken place in different parts of the country, this riot was the first to ocurr in the north in 40 years. Both black and white activists, including members of The Niagara Movement agreed that an interracial entity needed to be organized to combat racial injustice. From these concerns and the collaboration of an interracial group of leaders, the NAACP was born. The Niagara Movement was seen as being the precursor to the NAACP. W.E.B. DuBois was one of its founders.

Though the Niagara Movement was a powerful new force fighting for racial justice, Booker T. Washington and his position of “accommodationism” appeared to receive more acceptance from blacks at that time. Washington was highly revered in the black community and had close relationships with whites who were wealthy and had positions of influence. Washington used his connections and popularity to advocate against The Niagara Movement. It is interesting to note, that both groups agreed on the need for racial equity but disagreed on how to achieve it.

On September 18, 1895, Booker T. Washington delivered his famous “Atlanta Compromise” speech at the Cotton States and International Exposition in Atlanta. Though not without its critics, it is regarded as one of the most significant speeches in American history.

Washington’s speech responded to the “Negro problem”—of what should be done about the terrible socio-economic conditions under which blacks were living after emancipation; as well as the relationship between blacks and whites, particularly in the South. Washington promised his predominately white audience that he would encourage blacks to become skilled in areas such as agriculture, mechanics, commerce and domestic service. He further assured the crowd of the loyalty of the black race. Washington, seemed in the speech to take great pains to also assure the audience that blacks desire for social equality would not be forced artificially but would gradually occur over time. Washington also seemed intent to minimize the fears of whites regarding social integration. His speech seemed to imply that blacks and whites could maintain their separateness and still work together and have mutual progress.

Washington’s speech did encourage whites to take some responsibility in supporting the socio economic advancement of blacks. However, he made sure to praise the South for what he felt were opportunities they provided to blacks in the south since emancipation. Washington’s stressing a sort of shared responsibility resulted in his speech being called, “The Atlanta Compromise’. The speech was well received by those in attendance as well as other prominent African American leaders. However, some black leaders took great issue with the speech; feeling that Washington’s approach was too passive. One of Washington’s biggest critics was W.E.B Dubois.

Washington had his critics, none more vocal than another leading black educator and scholar of his day—W. E. B. Du Bois. Du Bois, “Mr. Washington represents in Negro thought the old attitude of adjustment and submission…. [His] programme practically accepts the alleged inferiority of the Negro races.” Dubois believed the problems of the Negro needed a different type of response. He believed blacks should be more aggressive in obtaining civil rights.The Atlanta Compromise speech was clearly Washington’s ‘answer’ for addressing the problems that blacks were now facing after emancipation. A position to which W.E.B. Dubois was staunchly opposed.

To read the speech in its entirety, click on the link below: