Ever Wonder What Happened To The Montgomery, AL Bus Rosa Parks Boarded on December 1, 1955?

Black Mail Fast Fact: The actual bus that Rosa Parks rode on December 1, 1955 (which helped launch the Montgomery Bus Boycott) sat in a field for 30 years in Alabama before it was restored to its original condition. The Henry Ford Museum in Dearborn, Michigan bought the bus through an auction for $492,000 in 2001 and then had it restored at an additional cost of $300,000 The restoration took place in Southfield, MI and was paid for by government grants (Save America’s Treasures Grant). The bus remains on display at The Henry Ford Museum 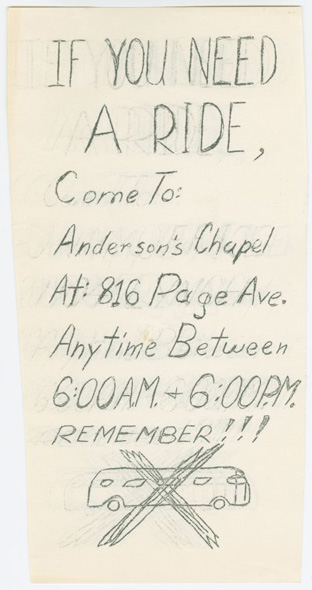 We Had No Choice But To Accept What Was The Custom.

The Bus Was Among The First Ways I Realized There Was A Black World And A White World.

What proverbial “bus” (injustice/discrimination/racism) is passing us by (on a daily basis)……that we are just accepting as a ‘way of life’?

True peace is not merely the absence of tension; it is the presence of justice. – Martin Luther King, Jr.

The Wailing Wall: Remnant of Racism & Segregation In The City of Detroit

The Wailing Wall of Detroit, MI (also referred to as 8 Mile Wall or Birwood Wall) is a concrete wall which stands 6 feet high and is a foot thick. The wall extends for approximately half a mile. It is a visible reminder of racial segregation in the City of Detroit. Following World War I, blacks migrated to Detroit in great numbers. Detroit was a major industrial center and at the time was home to a large immigrant population as well. Detroit’s industrial complex provided employment opportunities that drew many blacks from the South in search of a better life. They settled in segregated neighborhoods downtown such as Black Bottom and Paradise Valley as well as in the country-side which would later become Brightmoor and Wyoming Avenue on the Northwest Side of Detroit.

As Detroit continued to grow, it’s rural farmland was quickly being developed into housing developments. These housing developments were financed in part by loans from the Federal Housing Authority (FHA). However, the FHA would not give loans in neighborhoods that were deemed to be “undesirable” or “distressed”. These terms were used as code words that represented neighborhoods with a significant number of Jews and/or Blacks. As a result, the Wyoming/8 Mile area of Detroit remained largely undeveloped. Access to land in the inner city was rapidly being developed mostly for manufacturing companies. As a result, developers began looking at land near the Wyoming/8 Mile area in Northwest Detroit. In order to secure FHA loans for potential white buyers, developers would have to address the locations proximity to black neighborhoods that were already established in the area.  In 1941, a development company proposed the idea of building a wall to separate the new housing that would be built for whites, from the existing black neighborhood. It was mainly symbolic in nature. However, it served as a clear dividing line between black and white neighborhoods. This “symbolic” gesture satisfied the FHA, and it began to approve loans to build houses in the area.

Over time, the neighborhoods did integrate, due to the advances gained through the civil rights movement, the growth of the black middle class, and the eventual exodus of whites from the community. The wall still stands today, a visible memory of the impact of segregation and discrimination.

1963 Children’s March: Would You Have Allowed Your Children To Participate? 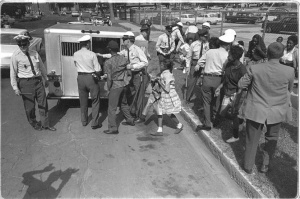 On May 2, 1963 nearly a thousand elementary, middle and high school and college students in Birmingham, Alabama participated in The Children’s Crusade. SCLC staff member James Bevel proposed recruiting local students, arguing that while many adults may be reluctant to participate in demonstrations, for fear of losing their jobs, their children had less to lose. King initially had reservations, but after deliberation he agreed, On May 2, more than a thousand black students skipped their classes and gathered at Sixth Street Baptist Church. As they approached police lines, hundreds were arrested and carried off to jail. 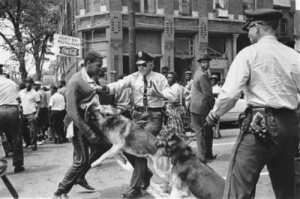 When hundreds more youth gathered the next day, commissioner Bull Connor directed the police and fire departments to use force to halt the demonstration. Images of children being blasted by high-pressure fire hoses, clubbed by police officers, and attacked by police dogs appeared on television and in newspapers and triggered outrage throughout the world. The Birmingham campaign ended on May 10 when the SCLC and local officials reached an agreement in which the city promised to desegregate downtown stores and release all protestors from jail if the SCLC would end the boycotts and demonstrations. While he faced criticism for exposing children to violence—most notably from Malcolm X, who said that “real men don’t put their children on the firing line”— King maintained that the demonstrations allowed children to develop “a sense of their own stake in freedom”

Black Mail Readers:  Would you have allowed your children to participate in march?  Why or Why Not?

Rosa Parks is a civil rights icon who is well known for not giving up her seat on a Montgomery Bus in 1955. Below are some facts that you may not know about Rosa Parks.