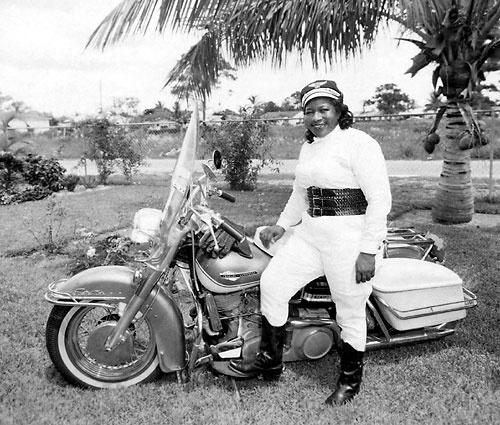 Bessie Stringfield: “The Negro Motorcycle Queen”. She began riding at a time when “good girls” did not ride motorcycles. Click the link to learn more about this amazing woman.

Bessie “BB” Stringfield (1911 – 1993) was a trailblazer and pioneer of her time. During the 1930’s and 40’s she took 8 solo rides across the United States by motorcycle. She was born in Kingston, Jamaica but raised in Boston, MA. By the age of 5 she had become an orphan. She was raised by an Irish Woman. The woman whose name she never disclosed was very good to her. In high school, at the age of 16, BB asked for a motorcycle and was given one; even though at the time, “good girls” did not ride motorcycles. It was a 1928 Indian Scout motorcycle. She had never ridden a motorcycle before but learned quickly. BB often said that “The Man Upstairs (God)” gave her the skills to ride. BB was catholic and her faith in God was very important to her. She would go on to own 27 Harley Davidson motorcycles during her lifetime. She said, “To me, a Harley is the only motorcycle ever made.”

At the age of 19 she began to toss a penny on a map and then ride to wherever the penny landed. She would eventually ride to 48 states. She also performed on her motorcycle in carnival stunt shows. Often, because she was black she would be denied places to stay while traveling. She would stay with black families or sleep at filling stations along the way. BB married and divorced 6 times. She and her first husband lost 3 children. After that, she had no more children. Following her divorce from her 3rd husband, Arthur Stringfield, he asked her to keep his last name because he felt she would make it famous. BB also worked for the U.S. Army as a civilian motorcycle dispatch rider during World War II. She was the only woman in her unit. She carried military documents between domestic military bases. She often encountered prejudice and discrimination while on the road. In one incident, she was run off the road by a man in a pick up truck. 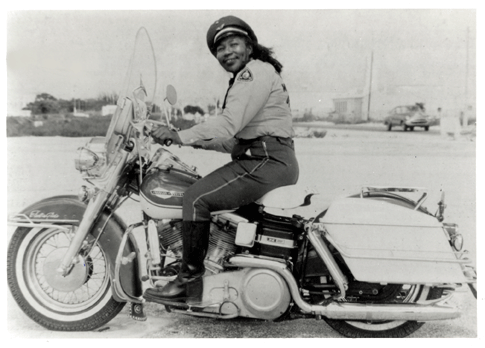 In the 1950’s BB became a licensed practical nurse and purchased a home in a Miami, FL suburb. During that time, she also founded the Iron Horse Motorcycle Club. On one occasion, BB disguised herself as a man and entered a flat track motorcycle race. However, she was denied the prize money when she took off her helmet and it was discovered that she was woman. Reporters referred to her as, “The Negro Motorcycle Queen” and “The Motorcycle Queen of Miami”. Later in life BB experienced medical complications from an enlarged heart. It was a condition that she had been diagnosed with years earlier. Her doctors advised her not ride but she told him that she would not live long if she was unable to ride. So she never quit riding. Se died in 1993 at age 82. BB was inducted into the Motorcycle Hall of Fame in 2002.

Ellen Walker Craig (1906 – 2000) was the first African American woman to be elected mayor of a municipality in the United States by popular vote. Craig was a life long resident of Urbancrest, OH. Urbancrest is located near Columbus, OH.  She was mayor from 1972-1975. Under her administration, Urbancrest received a $3 million dollar housing complex for low income citizens. She also improved street lighting, and made street repairs. A former domestic worker, she gained political experience through membership and leadership in several civic and political organizations. She also served on the Urbancrest City Council for 12 years.

She and her husband were also well known for their generosity. In their home they had a special drawer that was called, “God’s Drawer”. Located in her china cabinet, she and her husband kept money in the drawer for the needy. Each pay period they put money into the drawer and when families in the community had a need, “God’s Drawer” was opened. Ellen Walker Craig died in 2000.