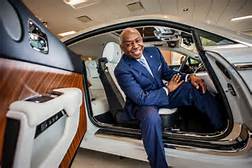 Thomas Moorehead is the world’s first African-American Rolls Royce car dealer. Moorehead is 71 year old native of Monroe, Louisiana. Moorehead earned a bachelors degree in business administration from Grambling State University (an HBCU) in 1966. He earned a masters degree in social work from the University of Michigan.  Prior to his success as an auto dealer, Moorehead worked as an analyst for Mobile and Chrysler and also as a director of community services at the University of Michigan. With just a few credits, and his dissertation remaining to obtain his Ph.d, he decided to leave his doctoral program and pursue a career in the automobile industry. Morehead’s mentor and Kappa Alpha Psi fraternity brother, James Bradley (Bradley Automotive Group) encourage him to pursue the opportunity. He told Moorehead that he could become a millionaire within 5 years if he was willing to step out and take a chance.

Moorehead quickly became successful. He would invest most of his savings to enter a dealer training program. He opened his first dealership in Omaha, Nebraska in 1988.  In 1995, he opened another dealership in Decatur, IL. He would also open a BMW dealership in Sterling, Virginia. Moorehead caught the eye of Rolls Royce due to his reputation and dedication to customer service and was selected as a Rolls Royce Dealer in 2014. His dealership territory covers Maryland, Pennsylvania, Delaware and the District of Columbia. A Rolls Royce sells for $250,000 – $550,000 depending on the vehicle. In addition to the Rolls Royce Dealership, Moorehead is also the owner of the largest and most successful minority owned BMW Dealership nationwide and ranks among the top 10% in sales. Moorehead is also a past president of the National Minority Auto Dealers Association.  In addition to his auto dealerships, Moorehead also owns several hotels in the Maryland area.

Moorehead is committed to giving back to his community. He desires to use his success as a way to help others. Moorehead is grateful for the mentorship and support he has received and wants to provide the same to others. In order to give back to the community, Thomas Moorehead and his wife have also started a foundation. The Joyce and Thomas Moorehead Foundation (JTMF) provides scholarships and mentoring opportunities for college students.

More information about Thomas Moorehead is available in the Michigan Chronicle