Negritude: Disorder Of Being Black 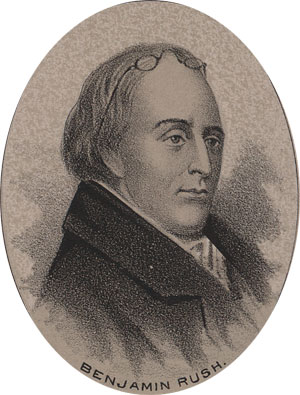 Dr. Benjamin Rush is known as the “Father Of American Psychiatry”. He was also an abolitionist.  Rush believed that blacks suffered from a disorder he called “Negritude” due then having dark skin.   He described this condition as being akin to leprosy.  The only cure for the condition was to become white.

Dr. Rush sited the case of Henry Moss, a slave who lost his dark skin color (probably through vitigulo),  to support his claim of Negritude being a medical condition.  He thought being black was a curable skin disease.  Rush wrote that “Whites should not tyrannize over [blacks], for their disease should entitle them to a double portion of humanity. However, by the same token, whites should not intermarry with them, for this would tend to infect posterity with the ‘disorder’… attempts must be made to cure the disease.”

Some of our Black Mail readers may remember our previous post about “Drapetomania”, a condition used to that characterized the desire of slaves to run away and seek freedom as an illness.

Scientific racism is institutional and systemic. It exists today.

9 thoughts on “Negritude: Disorder Of Being Black”