“Kids Who Die” By Langston Hughes 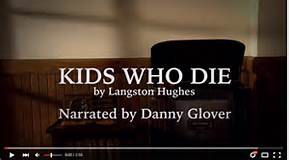 It is astonishing to consider that “Kids Who Die” was written by Langston Hughes in 1938…..77 Years ago!  The words are still ringing true even today!  The poem is narrated in this video by actor Danny Glover.

Kids Who Die by Langston Hughes

This is for the kids who die, Black and white, For kids will die certainly. The old and rich will live on awhile, As always, Eating blood and gold, Letting kids die.

Listen, kids who die— Maybe, now, there will be no monument for you Except in our hearts Maybe your bodies’ll be lost in a swamp Or a prison grave, or the potter’s field, Or the rivers where you’re drowned like Leibknecht But the day will come— You are sure yourselves that it is coming— When the marching feet of the masses Will raise for you a living monument of love, And joy, and laughter, And black hands and white hands clasped as one, And a song that reaches the sky— The song of the life triumphant Through the kids who die.

“I’d Rather See A Person With A Natural Mind And Processed Head Than A Processed Mind And A Natural Head.” -Erykah Badu

One thought on ““Kids Who Die” By Langston Hughes”